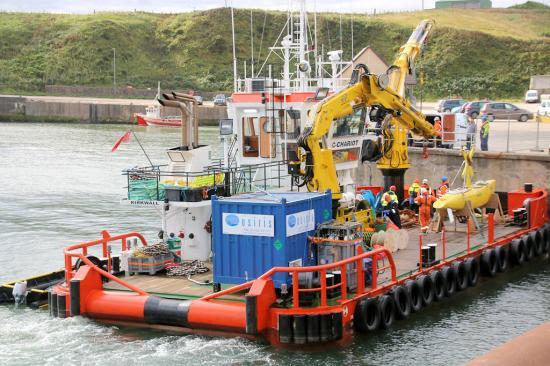 On Friday 18th September 2015 the 24 metre-long rectangular steel multi-cat C-Chariot built in 2013 was to be seen loading a Data-fish buoy at Gills Harbour, Caithness.

North Sea systems Ltd who own the Datafish describe it on their web site (http://www.northseasystems.com/) as follows -
"DataFish is North Sea System's metocean survey buoy for unforgiving marine environments. By providing real time data and undertaking long duration, multi-application surveys, the system reduces the risk and cost of metocean data collection. DataFish is the only system able to provide real time data from tidal energy sites."

These are exciting times for the Pentland Firth and there is more and more chance to see unusual vessels as Gills is near to many of the potential sites for underwater turbines.

Transiting vessels are requested to pass at least 200m away from Data Fish marker buoy.

John Green photographed C-Chariot as it loaded the Datafish at Gills getting ready to deploy it in the Pentland Firth.