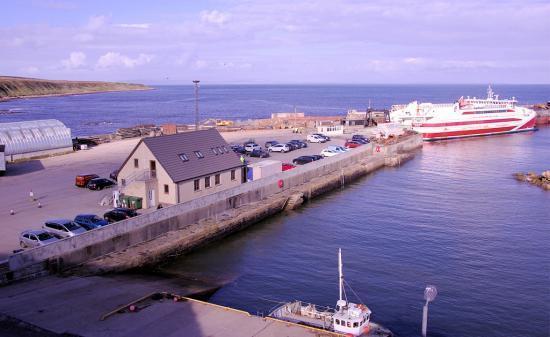 A new generation of younger local folk look set to take over the reins of running Gills Harbour Ltd, the local company that owns and operates the busy little port on the shores of the Pentland Firth's Inner Sound that holds its AGM this Saturday (10.10.20) morning at 10:00 am.

The influx of younger blood comes after two key directors of the group that had run 'Canisbay's Peoples Port' both announced their retirement from office, whilst another Gills Harbour Ltd (GHL) office-bearer has declined to seek re-election.

A body running the 'built' marine facilities on Caithness's North Coast at the landward head of Gills Bay has been in existence for well over a century.

Community-owned Gills Harbour Ltd normally holds its Annual General Meeting in the Spring of each year, but this could not take place in March 2020 due to the 'lockdown' hastily imposed by the Government in response to the Covid 19 pandemic.

The AGM has been re-scheduled for 10:00 am on Saturday morning (10.10.20) at the Seaview Hotel, John O'Groats to ensure 'Safe social distancing', rather than at the harbour as has been the case for AGMs until now.

Yesterday the Rev Lyall Rennie ... who has served as the GHL company's hon. secretary in recent years ... said that he understood that enough volunteer directors had come forward to express their willingness to fill the necessary office-bearer posts and responsibilities for 2020/21.

These days, Gills Harbour is best-known as the Mainland base for the busiest passenger and freight-goods route across the Pentland Firth to Orkney, operated thrice-daily, year-round by Pentland Ferries Ltd.

The current vessel is the brand-new British-designed 85 metre (278') long Alfred which started her regular crossings in November 2019. The ultra-modern four-engine vessel was subsequently chosen as the world's 2019 'Ship of the Year' under the 'ferry' classification by an international trade publication.

Most of the on-site research works in connection with this multi-million pound project ... which is still at an early stage of development ... has been carried out by scientists and engineers on board smaller vessels using Gills as a base for themselves and sensitive measuring equipment deployed in the waters.

Gills Harbour is the only officially-recognised Economic Development Zone in NE Caithness.

This follows the adoption of the Highland Council's Caithness & Sutherland Development Plan (CaSPlan) by the Scottish Government in the second half of 2018.

That same year, GHL commissioned the North of Scotland's best-known economist, Mr Tony Mackay of Inverness-based Mackay Consultants Ltd, to investigate future prospects for the port outwith of the successful ferry operations that are conducted from GHL's land-holding long-leased by it to Pentland Ferries Ltd.

The Gills Harbour Study by Mr Mackay ... whose antecedents were active in Wick's one-time booming herring trade ... stated that there were good prospects for a combined scheme involving renewable energy, inshore fishing and leisure-related businesses..

But he emphasised that its Inner Basin ... adjacent to the original 136 metre (450') long Gills Pier ... had to be dredged down to minus 2.5 metres in line with recommendations made in 2018 by practical post-graduate staff of the Thurso-based Environmental Research Institute, part of the University of the Highlands & Islands, who conducted detailed hydrological (water-depth) and wave-motion studies there.

The original 150 yard-long (450') Gills Pier was built in 1905 in bid to broaden the base of the Canisbay economy away from perceived over-reliance on crofting scale agriculture.

It was done under as partnership between the local community and the top-tier Congested Districts Board, the first economic development agency for qualifying rural areas of the Highlands & Islands that was chaired by the Scottish Secretary of State.

Back then, 'a steamer terminus for the Orkney trade' was being considered as were improved facilities for small inshore fishing boats seeking to catch cod, ling and lobsters from Pentland Firth waters.

Gills Harbour Ltd lists its aims in its Companies House documentation: 'The objects of the company shall be to own, manage, operate, maintain, improve and develop Gills Harbour in Canisbay Parish, Caithness, Scotland on behalf of local residents and the wider communities of Northern Scotland for the encouragement of sustainable employment through trade, commerce, industry, transport, energy and marine activities (including leisure-related) at, or in the vicinity of, the harbour.

All interested in pursuing a positive, sustainable future for Gills Harbour are invited to attend its AGM.

Mr Mowat has been active in administering Gills Harbour since the mid-1980s.

Yesterday he said: 'I'm pleased to hear that we are going to have a younger generation that will be taking the helm here.

'But in my early years we regularly has apprentices and college students as members and that would be welcome again, especially for the energy they can bring to proceedings'.

The company behind the world-leading tidal-stream prototype power plant in the Pentland Firth's Inner Sound is set to start manufacturing a new-style turbine that is hopes will reduce the project's generating costs.   Simec Atlantis Energy (SAE) and a privately-owned specialist engineering firm from Spain's Bay of Biscay coastline have jointly been conducting 'research and development' (R& D) on the project for almost a year and are now ready to give it the go-ahead.
[Air / Bus / Rail / Ferry Services]
19/8/2020