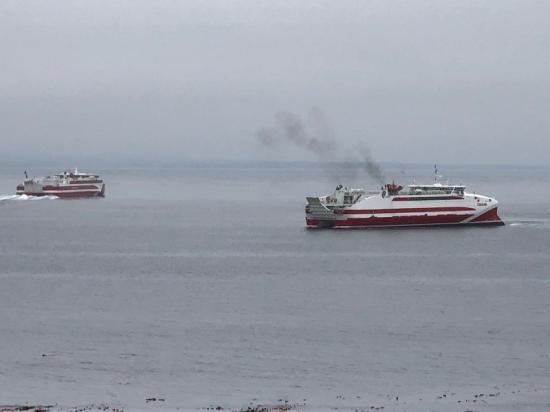 An 'old friend' returns to Gills Bay after an absence of manymonths.

The Pentalina was the regular ship on the the most popular trans-Pentland route until she as replaced by Alfred on November 1st 2019.

Both vessels are owned and operated by family company Pentland Ferries Ltd, with its h.q. at the South Ronaldsay village, headed by its MD sea-transport innovator & entrepreneur Mr Andrew Banks.

A large quantity of cabling and heavy mobile plant was loaded on to Pentalina at mainland Scotland's most Northern ferry port en route for Lyness on the Isle of Hoy, Orkney. Lyness was the major RN shore base for Scapa Flow in WWII and its deep-water so-called Golden Wharf was purpose-build so that temporary repairs could be done to any RN warships that could have been been damaged by enemy action.

Onlooker at Gills stated the the cargo was equipment needed for the on-land section of the new £30 million replacement sub-sea cable that Scottish and Southern Energy Networks is currently having laid between Rackwick Bay in North Hoy, and Murkle Bay near Castltown, Caithness.

A new generation of younger local folk look set to take over the reins of running Gills Harbour Ltd, the local company that owns and operates the busy little port on the shores of the Pentland Firth's Inner Sound that holds its AGM this Saturday (10.10.20) morning at 10:00 am.   The influx of younger blood comes after two key directors of the group that had run 'Canisbay's Peoples Port' both announced their retirement from office, whilst another Gills Harbour Ltd (GHL) office-bearer has declined to seek re-election.
[Marine Services]
16/8/2020