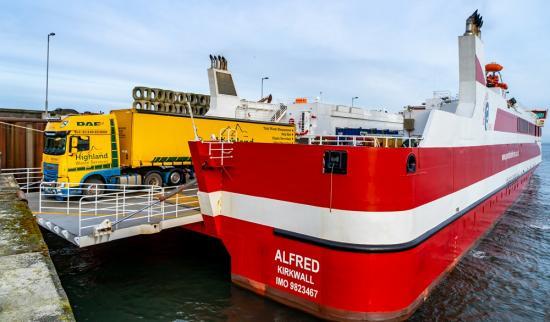 With expert guidance from the crew of Pentland Ferries "Alfred" this lorry safely loads onto the ferry at Gills Harbour, Caithness, today (9 January 2019), for her crossing to St Margarets Hope.

Sea swells were evident, making the job even harder & causing the ferry to be delayed.

Here is the Normand Cutter, the Norwegian-owned offshore construction vessel that has been the base for works on Simec Atlantis Energy's (SAE's) MeyGen site in the Pentland Firth's Inner Sound, off Gills Bay during the current neap-tide sequence, that has lasted most of the week commencing 11.08.20.   Picture by retired C of S Kirk Minister the Rev Lyall Rennie, who lives at Lower Warse, Canisbay, on the shores of Gills Bay..
[Air / Bus / Rail / Ferry Services]
27/10/2019

Two vessels made their debut visits to Gills Harbour on the morning of Sunday, May 10th, 2015.   The mini-ships Uskmoor and Lodesman sailed across the Pentland Firth from Orkney to conduct operations in the Inner Sound of the narrow, tide-swept, channel separating Caithness from the isles.