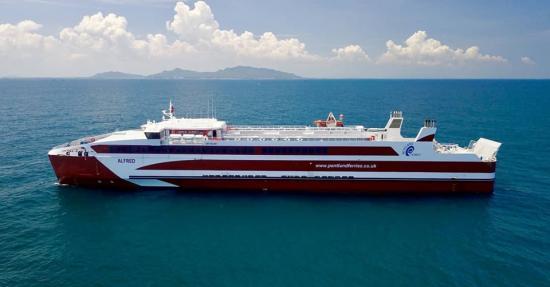 Pentland Ferries has announced that the company's new ship, Alfred, left the yard in Vietnam, yesterday morning, Thursday, to start the long voyage home to Orkney.

Director of Pentland Ferries, Kathryn Scollie, said: "We are delighted that the MV Alfred is now on her way. We are now very much looking forward to introducing her to the St Margaret's Hope - Gill's Bay service before the end of the year.

"We are very grateful for all the support we have received and, in particular, all the hard work from our own team, that has helped get us to this stage.

"The arrival and commissioning of this new vessel is hugely significant for us. We are committed to delivering the best possible service for local people and for the many visitors who come to our islands. We are thrilled to be able to make today’s announcement and we await the arrival of the Alfred with great anticipation."

The Alfred, which has been named after Pentland Ferries’ owner and managing director, Andrew Banks’ father, has carrying capacity for 430 passengers and 98 cars, or 54 cars and 12 articulated vehicles/coaches.

“All being well, the ship will be here mid October," said Kathryn, “and we are sure that our customers will really appreciate the enhancement of service it will bring to Orkney."

Community-owned Gills Harbour is the most Northerly seaport on the British mainland, lying on the shores of the Pentland Firth's Inner Sound, just off the A 836 road, only four miles West of John O'Groats.   The spring of 2015 has seen some significant developments locally, both in sea-transport and marine electricity, that bode well for the future of the little port on the inland 'apex' of Gills Bay; it belongs to the 600 people living along the North coast.