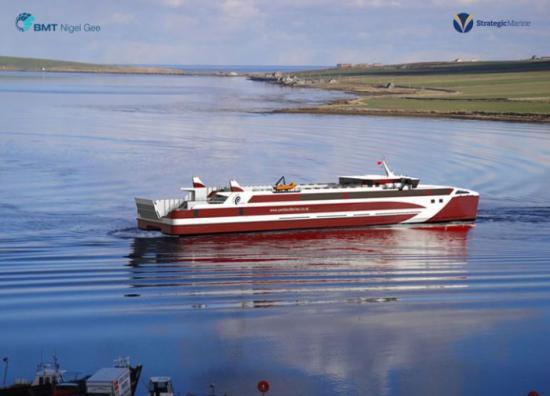 BMT Nigel Gee (BMT), a subsidiary of BMT Group, has announced a new project to design an 85m steel-hulled catamaran RoPax ferry for Strategic Marine, a subsidiary of Triyards Holding Limited. The ferry is for Scottish ferry operator Pentland Ferries and BMT will be responsible for concept through to production design, working closely with Strategic Marine.

RoPax The vessel will replace Pentalina that has been operating on the route from the Scottish mainland to the Orkney Islands since 2008. The new vessel has a significantly increased capacity compared to Pentalina and will be capable of transferring up to 98 cars or a combination of cars and trucks together with 430 passengers from Gills Bay on the mainland to St. Margaret's Hope on the Orkney Islands. The crossing takes approximately one hour, sailing through Pentland Firth and into the Orkney Archipelago. This is the shortest and quickest sea route to Orkney with a vehicle.

The vessel totals 84.5m in length, powered by four YANMAR 6EY17W engines. The ferry will travel at a service speed of 16 knots. She has space to accommodate 50,000 litres of fuel plus an extra 50,000 litres in a long-range fuel tank. This will allow the vessel to sail under her own power from Strategic Marine in Vietnam to the Orkney Islands, a trip of some 5,481n.m.

BMT Nigel Gee's Technical Director, Ed Dudson, comments: "We are extremely pleased to win this design contract with Strategic Marine for Pentland Ferries. We look forward to seeing this vessel in service in the summer of 2018."

OFFICIAL FIGURES SHOW MORE PEOPLE AND CARS SAILED ACROSS THE PENTLAND FIRTH FROM CAITHNESS TO ORKNEY IN 2016 FROM GILLS BAY THAN ON ANY OTHER ROUTE.   Official figures recently published by Scottish Government 'spending watchdog' body Audit Scotland show that the so-called 'short sea-route' from Gills Bay to St Margaret's Hope was the busiest seaway to Orkney across the Pentland Firth in 2016.
[Marine Services]
10/5/2015

Two vessels made their debut visits to Gills Harbour on the morning of Sunday, May 10th, 2015.   The mini-ships Uskmoor and Lodesman sailed across the Pentland Firth from Orkney to conduct operations in the Inner Sound of the narrow, tide-swept, channel separating Caithness from the isles.