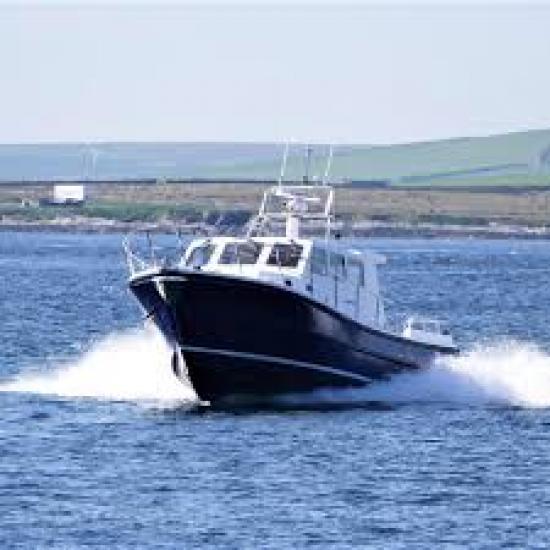 The company behind the world-leading tidal-stream prototype power plant in the Pentland Firth's Inner Sound is set to start manufacturing a new-style turbine that is hopes will reduce the project's generating costs.

Simec Atlantis Energy (SAE) and a privately-owned specialist engineering firm from Spain's Bay of Biscay coastline have jointly been conducting 'research and development' (R& D) on the project for almost a year and are now ready to give it the go-ahead.

The innovation by SAE and its Spanish partner Asturfeito will involved full-scale testing of a 'variable pitch' system on the blades turned by the powerful streams of the Inner Sound that can run to 10 miles per hour of more on the spring tides sequences.

The aim of the project is to reduce the levelised cost of energy (LCOE) for Atlantis's technology on its AR1500 turbine.

The Spanish firm employs c. 250 people and operates from four large workshops with a total floor area of 32,000 metres close to the harbour of the city of Aviles, (popn.60,000) in Asturias that has been a major industrial centre for over a century. The firm was founded in 1989 to supply capital goods to the local mining and steel industries but had since diversified into work in the nuclear, oil & gas and renewables sectors and has 30 ultra-modern computer-controlled CNC 'machinating centres' in operation as well as high-capacity overhead cranes.

Cutting the cost of generating electricity from the kinetic energy in the tidal stream in the MeyGen site ... that lies just over one mile out from the Gills Bay coastline ... is a key aim of SAE's Inner Sound project.

The scheme has been awarded c. 1 Million euros from two funds controlled by the European Union and distributed via its 'Executive Agency for Small and Medium-sized Enterprises'.

Mr Drew Blaxland, SAE's director of turbine & engineering services, said that the grant will support the innovations required to take the MeyGen project enhancement forward with a specific focus on the turbine upgrades needed to use the recently-installed sub-sea 'hub' and the shared 'export' cable to the Ness of Quoys, one mile east of Gills Harbour and close to Canisbay's historic medieval-origin Kirk.

Gills Harbour has been busy this week as a forward shore base for three workboat vessels involved in sub-sea activities the Inner Sound tidal array site.

A team of divers have been going down from the catamaran vessel Teal of Wick ... which those days is based at Invergordon where owner Caldive Ltd company has its h.q. ... while the almost-new Orkney-based high-speed vessel Athenia has been used for ROV operations on MeyGen.

Athenia,which recently replaced the regular Gills visitor the smaller Advance, belongs to Roving Eye Enterprises Ltd of Orphir on the shores of Scapa Flow whose managing director Mr Keith Bichan has been pressing the Canisbay community owners of the little port to proceed with getting its inner basin upgraded to what he says are 'normal, modern' standards and which he states would much enhance its value for workboats.

Also present in the little flotilla was the Causeway Explorer, performing a guard ship and safety role.

Yesterday Bill Mowat, a director of Gills Harbour Ltd said that he and his colleagues were very pleased to learn of the cost-reducing advances that SAE was overseeing.

He added that it was fine to see that the harbour was again being actively used .... for the second neap-tide spell in November ... in connection with enhancing MeyGen operations.

He added: 'Cost reduction are necessary to ensure that Caithness ends up with a sizeable tidal-stream energy industry in the longer term that will help get a state-of-the art advanced 'computer data process centre' with thirty highly-skilled jobs being established in Canisbay parish within the next few years.'

Its been a busy few days at local community-owned Gills Harbour .....  sometimes in suberb sunny weather as here ...
[Marine Services]
8/10/2020