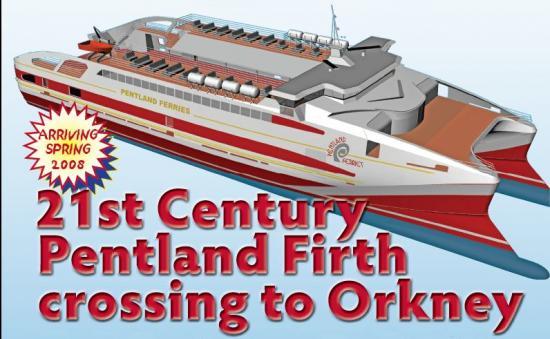 Spring 2008 will bring the arrival of the fastest ferry over the Pentland Firth. A new catamaran state of the art high speed ferry will whisk passengers from Gills terminal in Caithnes over to Orkney.

The new ferry using the latest technology and meeting the highest safety standards demanded by regulators and passengers will have the capability of moving at high speeds to take cars and passengers quickly back and forth across the Pentland Firth bringing Caithness and Orkney closer together.

With a journey time of less than an hour in prospect even people who do not normally like sea crossings will find the level of comfort and the short trip not much of a problem. For those who enjoy sea travel the hi-speed trip will be both exciting and exhilarating.

With views of the coast making for one of the most spectacular ferry trips in Scotland. Day trips from Caithness and long weekends not taken up with hours of travel at either end - at least for locals will be welcome.

Seating will be available in a comfortable lounge or for those want to look out for whales and dolphins on the deck. Even on short journeys the Pentland Firth offers the chance to see many seabirds that are making their way to fedding places or between the islands and the mainland.

Lights snacks and drinks willbe available in the lounge making so that even less than an hour might seem like a few minutes.

Passengers will require to be at the terminal as before about 30 minutes before departure and it willbe advsiable to book ahead as demand is expected to be heavy. Booking can be done by Freefone 0800 688 8998 or on the web site www.pentlandferries.co.uk

2008 looks like being an interesting year for sea related activities in the north as Wick Harbour will have its new marina installed following the successful installation of pontoons this year. The Pentland Firth looks like it is set to become much busier in coming years. Not only is their likely to be much more economic development with possible energy projects beginning to look seriously at the possibilities of extracting energy for UK supply from the tremendous power of the firth. Oil extraction west of Shetland, wind mills in the Moray Firth off the East Caithness coast and still the possibility of a cargo terminal in Scapa Flow. 2008 looks to be an exciting year for sea related activities in the north of Scotland.

The new Pentland Firth ferry looks as if it moght just be the start. We recommend you book your place early as soon as bookings are opened.

Two vessels made their debut visits to Gills Harbour on the morning of Sunday, May 10th, 2015.   The mini-ships Uskmoor and Lodesman sailed across the Pentland Firth from Orkney to conduct operations in the Inner Sound of the narrow, tide-swept, channel separating Caithness from the isles.
[Air / Bus / Rail / Ferry Services]
18/2/2015

Pentland Ferries is all set to buy the former Caledonian MacBrayne ferry Saturn.   The move has been confirmed by the owners of the ship, Caledonian Maritime Assets Ltd (CMAL)..