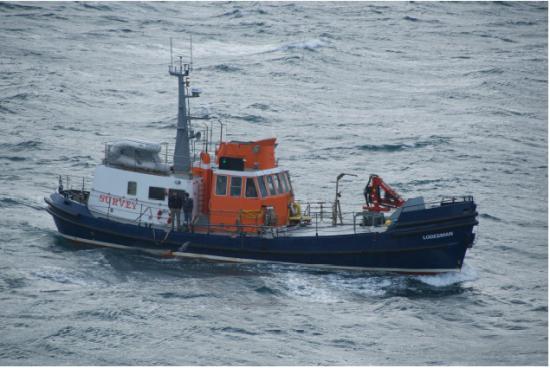 Two vessels made their debut visits to Gills Harbour on the morning of Sunday, May 10th, 2015.

The mini-ships Uskmoor and Lodesman sailed across the Pentland Firth from Orkney to conduct operations in the Inner Sound of the narrow, tide-swept, channel separating Caithness from the isles.

It provided precise positions in the Inner Sound from where the company would be conducting its marine operations, without naming the vessels to be utilised.

The steel-hulled, 16 metre-long, Uskmoor is owned and operated by Leask Marine of Kirkwall. She has a 4-tonne-capacity gantry crane at her stern, serviced by a single-barrel hydraulic winch, while a powerful Hiab crane fitted on one side can lift up to 3.8 tonnes at maximum alignment.

Its 25 metre-long many purpose rectangular-shaped 'multi-cats' C-Salvor and C-Odyssey have been fairly regular users of Gills Harbour over the past 18 months, as work on Atlantis Resources plc/MeyGen Ltd's pioneering £50 million 'Demonstration Array' of four electricity-generating tidal turbines has gathered pace. C-Salvor has recently been contracted to James Fisher Marine Services (JFMS), which holds the Inner Sound marine contract from the above.

Uskmoor has been used extensively in launching and recovering sophisticated Acoustic Doppler Current Profilers (ADCPs) at the tidal test-site of the European Marine Energy Centre (EMEC) at Falls of Warness, off Eday island in Orkney. She arrived at Gills Harbour just before 7:00 am on 10.05.14.

She has also been used 'in supporting inshore cable-laying projects throughout the UK', the company states. It is understood that several vessels in the Leask Marine fleet have charter-work overseas at present; the company added a third tug-style multi-cat, C-Chariot, to its successful fleet earlier this Spring (2015).

She is a former Trinity House pilot vessel with a steel hull and a superstructure made of lighter 'glass reinforced plastic' (grp).

Lodesman is described as the 'primary work boat' of Roving Eye Enterprises, of Orphir, Orkney, on the shores of Scapa Flow.

Her owners state that, having been built as a '24-hour, all-weather pilot-boat' that their 'very capable manoeuvrable vessel is able to work in the extreme environment of the Pentland Firth in safety and comfort'.

This 80-tonne 'mini-ship has been specially modified to make Lodesman even more suitable for sea-operations using ROVs (remote-operated vehicles) which are tethered to and controlled from the mother-ship Lodesman for a wide range of underwater tasks for the 'marine electricity' market.

Both vessels have been used for ADCP work.

Partrac Ltd's operations this week are for recovering three six-sided stainless-steel 'cages' of 1.8 x 1.8 metres, that had been used to house ADCPs just over 0.5 metres off the seabed.

The frames are all attached to a 160 metre-long single steel wire ground-rope, while several other ground-weights are also being recovered after having spent the past winter under the 33 metre deep waters of the Inner Sound.

Those had all been used in the extensive Turbulence in the Marine Environment (TIME) study which Partrac Ltd operated for the Government-backed practical 'renewables' research body the Carbon Trust in the autumn of 2014 from Gills Harbour.

This was the most expensive applied-science experiment run in Caithness since Dounreay's heyday and was designed to find out about 'turbulence' affecting the Inner Sound's restless water-column half-way up between the seabed and it surface, roughly at the height of hubs of planned tidal turbines.

Top Carbon Trust marine scientist Dr Angus Vantoch-Wood came to Gills Harbour during the month-long test-programme of works that was not directly linked to MeyGen Ltd's activities there; it also made use of the pioneering Canadian-built Nemo buoy, which was recovered from the Sound last October.

During the past two weeks community-owned Gills Harbour Ltd has been represented at two major Scottish conference and exhibitions; The Scottish Highland Renewable Energy Conference in Inverness and the main European renewables All-Energy event that was held in Glasgow's Scottish Exhibitions & Conference Centre (SECC) for the first time, having been previously hosted in Aberdeen.

Both annual milestone events were opened by Mr Fergus Ewing MSP, the Scottish Government's Minister for Energy and Tourism, who re-iterated his intention to visit Gills Harbour for the first time in the near future.

Mr Bill Mowat, the former four-term (16 years) elected representative for NE Caithness on the Inverness-based Highland Council, is the chairman of the Canisbay harbour company.

He said: 'We are pleased to see that Gills Harbour is the little port of choice for mini-ships involved in Inner sound operations. We know that there will be much activity here over the coming months as works with the Inner Sound tidal electricity Demonstration Array roll out.

'The MeyGen Ltd sub-sea site lies between 1 and 1.5 miles off our harbour's entrance channel. The main operators and managers of small ships, such as Uskmoor and Lodesman, have been telling us about wishing to see our facilities being enhanced to make Gills Harbour even more suitable for those and multi-cats and we intend responding to this as positively as is possible for us'.