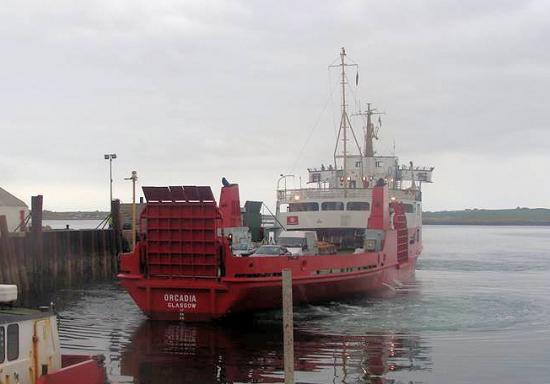 Community-owned Gills Harbour is the most Northerly seaport on the British mainland, lying on the shores of the Pentland Firth's Inner Sound, just off the A 836 road, only four miles West of John O'Groats.

The spring of 2015 has seen some significant developments locally, both in sea-transport and marine electricity, that bode well for the future of the little port on the inland 'apex' of Gills Bay; it belongs to the 600 people living along the North coast. of Canisbay, Caithness.

Gills Harbour is best-known as the mainland terminus of the busy 15 mile 'short sea route' to Orkney. Operators Pentland Ferries Ltd signalled that Summer was on its way by completing its first scheduled 'four return-trip' crossings of 2015 from Gills with its modern 70 metre-long catamaran RO:RO passenger and vehicle ferry Pentalina on Saturday, May 2, to cope with busy Bank Holiday demand; the vessel provides three daily return trips year-round, with an extra run in the summer season.

Soon Gills Harbour will witness a second 70 metre RO:RO company ship on the route, with the first call by the newly-refitted Orcadia expected within c. 6 /8 weeks (end June; early July, 2015). This vessel, formerly known as Saturn, will provide a freight service to free-up extra space for cars and passengers on Pentalina at peak times, according to the company's MD Mr Andrew Banks OBE.

She underwent upgrading and replacement procedures in dry-and wet-dock in Greenock, on the Lower Clyde in Renfrew-shire, during April, while further on-board engineering work is on-going in Orkney now.

The sea-transport entrepreneur has got the North of Scotland's off-shore and on-shore renewables industry excited, as Pentland Ferries' Orcadia is also being made available to freight large or bulky components for wind and tidal turbines directly to the 'link-span' at Gills Harbour, or to many other ports in the Highlands and Islands with compatible, alterable, 'ramps' for ship-to-shore loading/unloading.

Viewers of BBC Scotland Landward TV programme in early May saw Pentalina in action, but were also given an insight into a novel construction and sub-sea drilling programme on the shores of Gills Bay, that will see world-wide attention focussed on the Firth's Inner Sound next year.

This was at Canisbay's Ness of Quoys, where the land-side erection of facilities to handle renewable electricity generated for Atlantis Resource plc's MeyGen Ltd subsidiary by the fast-flows of the Pentland sea-currents is well under way, in a programme with international electrical contractors ABB is the lead role.

The seaward aspect of the innovative £50 million Atlantis development will see four tidal turbines being emplaced during 2016 on the Inner Sound's 35 metre deep seabed, a World-first. This aspect of the 'horizontal hydro' electric scheme is the responsibility of James Fisher Marine Services Ltd (JFMS), itself a subsidiary of James Fisher & Sons plc., one of the UK's most innovative shipping and logistics public companies from Barrow-in-Furness, Cumbria.

Gills Harbour lies just over one mile from the 'offshore' scene of the four-turbine 'demonstration tidal array' and several calls by powerful rectangular-shaped 25 metre-long many-purpose little ships, known as multi-cats, have already been made during winter and spring of this year by such vessels under JFMS aegis ... with more calls to come in an on-going advertised programme.

'Directional' drilling into the Caithness flagstone bedrock under the Gills Bay coastline into the Inner Sound from Ness of Quoys site is actively going ahead ; the bore-holes will be used to 'thread' the cables coming ashore from the generating sub-sea turbines.

The bore-holes reach the seabed about 600 metres offshore and those points have been marked by sea-safety navigational buoys laid by the £3.5 million multi-cat C-Odyssey in an operation from Gills Harbour in March, 2015.

Multi-cats will be involved in towage, cable-laying support and general survey as the roll-out continues this year and next, and the directors of Gills Harbour Ltd are preparing to embark on a project to make the small port's Inner Basin more suitable for offering round-the-clock facilities to the operators of such little ships.

The 8 MW 'demonstration array' is the start of a 400 MW Inner Sound sub-sea power-station that Atlantis Resource hopes to complete by the early 2020s.

Chairman Bill Mowat, a four-term former Highland Councillor for NE Caithness, says: 'We are very much aware that Gills Harbour is the favoured shore base for multi-cats & other work-vessels involved in tidal electricity projects in this area. Thus we are listening very carefully to proposals from operators of such mini-ships, and our directors and members are anticipating some public-sector support in making our facility better for those, as well as for our regular existing users'.